Red’s a billionaire and We Are The People. Down to brass tacks.

NO Village at Wolf Creek.
Durango Herald's, Jonathan Romeo wrote a story March 7th 2019 about the latest court twist in the Village at Wolf Creek saga:  "A Freedom of Information Act was filed nearly eight months ago by a coalition of environmental groups to obtain select U.S. Forest Service documents related to the controversial Village at Wolf Creek development atop Wolf Creek Pass. Two-hundred-and-thirty days later, and well past the Forest Service’s 20-day deadline, not a single file has been released.
But that should change Thursday after a U.S. magistrate judge ordered the Forest Service to start releasing documents asked for in the FOIA request. The order came in response to a lawsuit filed by opponents of the proposed housing and commercial development." ... " 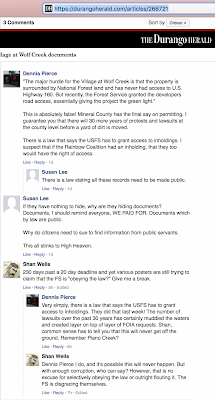 After posting quotes from yesterday's Durango Herald article, I was reading the comments.


Dennis points to ANILCA and cries foul on behalf of Mr. McCombs,

“There is a law that says the USFS has to grant access to inholdings.”

Is that a fact?  There’s another side to this story that's worth listening to, particularly if you want to understand the unrelenting opposition to the notion of bulldozing a Village at Wolf Creek into Alberta Park.

Among many other things, in 1980 ANILCA was created for property owners who suddenly found themselves in a landlocked ‘inholding’ because of a newly created National Park or other federal designated areas.  Alberta Park was legally designated integral to Rio Grande National Forest since its creation in 1908.

In the 1980s Mr. Red McCombs (with pals LMJV) purchased 3 middle of nowhere San Luis Valley foothill land parcels which the Forest Service had been eyeing in order to pretty up map boundaries (seriously). He then engaged in those go-go '80s National Forest Landswap Poker Games and intended to parley those no-where foothills parcels for the bonanza at the heart of the Wolf Creek drainage basin, near Wolf Creek Ski Area.


It didn’t matter to him that Alberta Park was an integral part of the Wolf Creek watershed and protected for the General Good of the American People since 1908.

All McCombs could see was profits, totally oblivious to what an amazing biological keystone parcel this piece of unadulterated wetlands and ancient fens wilderness was for the greater Wolf Creek watershed and the Rio Grande River for that matter.

It never entered his billionaire mind that there was good reason that the powers that be decided to protect that land back in 1908.

Ecological balance, environmental concerns. nurturing our wildlands all those considerations Red’s developers and boosters laughed off as, hippy devil talk.

Physical facts, that these landscapes are literally part of our life support systems doesn’t concern him or them, what does Earth’s long term health matter?

Back to Red’s real estate poker game, he lost in Colorado.  State and regional Forest Service officials concluded his offer was a bad bet for the health of the Rio Grande National Forest and they roundly rejected LMJV’s land swap offer.

But, Red held a trump card, billionaires own politicians, so back in the ‘real world’ of Washington D.C., deep in the bowels of the USDA, papers were fixed and presto Red had his land swap.

And now his enablers are crying about the poor guy having to put up with yet more of this never ending opposition from American citizens.

Cry me a river Dennis.  Red’s a billionaire and We Are The People, deal with it.  We will continue to oppose LMJV’s insane speculation, we are not in the ‘80s any more, not that rich guys pay any attention to how our planet has been shifting under our noses.

For the record, Red McCombs has been dishonest from the get go, such a telling everyone he wanted a few luxury cabins.  After the deal was in - his plans blossomed to 10,000 people worth of luxury homes.  Well, Red got caught and he got stopped.  Here’s one for the American way.

Dennis, just cause other billionaires got away with it, is no reason for us to let Red get away with his atrocity dream of destroying Alberta Park’s ancient watershed and fens.  Which building hundreds of homes and business on top of them certainly will do, no matter how many berms you bulldoze into place for show.

We warned Red McCombs decades ago, his intentions were destructive, immoral and were bound to arouse deep moral indignation, antipathy and opposition among Colorado citizens and tax payers.  But will this Texan lowlander ever learn?

Unfortunately it seems this has gone from a desired speculative business deal, to an angry old richer than god guy, who’d rather get even, than learn some lessons and admit maybe he was wrong and enough is enough.

In support of my previous claims I submit
Regional Policy on the Protection of Fens, resource category 1, as amended, U.S. Fish and Wildlife Service Region 6
January 20, 1999
https://no-villageatwolfcreek.blogspot.com/2015/01/fens-resource-category-1-usfws.html
~ ~ ~ ~ ~ ~ ~ ~ ~

Posted by citizenschallenge at 11:18 PM