{PS. Thank you San Juan Citizens Alliance for all you do!}

In 1986 Leavell Properties, Inc. (later joined by Texas billionaire B. J. “Red” McCombs to form the Leavell-McCombs Joint Venture, or LMJV) swapped land with the United States Forest Service to obtain a property on top of Wolf Creek Pass surrounded by Forest Service land. McCombs, who now spearheads the project, expanded the plan to his “Village at Wolf Creek.” In order to construct the Village at Wolf creek, however, LMJV needs Forest Service approval to gain year-round highway access to the isolated property.
Since the beginning, the “Friends of Wolf Creek” – a coalition of conservation groups from around the state – have fought to ensure the development is never realized. So far we’ve been able to keep construction at bay, forcing the Forest Service to hand over documents and rewrite woefully inadequate Environmental Impact Statements (EISs). In 2006, we sued the Forest Service for inappropriately colluding with the developer during environmental assessments, and won.
Our partner Rocky Mountain Wild sued the Forest Service three times for disregarding Freedom of Information Act (FOIA) requests. Rocky Mountain Wild won the first two cases and the third is in process.
In May of 2017, we won another lawsuit, putting the development on hold yet again. A federal judge nullified the land exchange on grounds the Forest Service avoided a thorough analysis of the environmental impacts of development in their latest EIS and that they failed to meet independent review requirements.
The judge agreed that the Forest Service shirked their responsibility by ignoring the immense impacts of building a city at 10,400’.
But McCombs and the Forest Service refused to accept the public’s verdict opposing the destructive project, and in February 2019 the Forest Service approved yet another scheme to give McCombs carte blanche for development.
The 2019 decision simply hands over a paved access road to McCombs using precisely the same flawed environmental analysis used to justify the land exchange decision that was invalidated by the court in 2017.
As we investigate the agency’s justification, the Forest Service finally started to hand over the documents behind its decision in March 2019, under court order, after fighting public transparency for 8 months.
It’s been a long 30-year journey, but we remain committed to ensuring the Village at Wolf Creek never defaces the heart of the San Juans.

STOP the Pillage - NO Village at Wolf Creek! 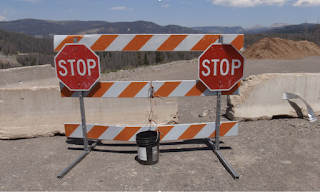 Colorado Caucus: March 7, 2020
Colorado will be having a Presidential Primary Election on Tuesday, March 3, 2020 for the first time in many years!

But on Saturday, March 7, 2020,  Democrats will still be gathering at precincts all across the state to caucus.

I thought I’d check in with the San Juan Citizens Alliance and Friends of Wolf Creek, so that I can add any relevant updates to this blog.
Seems to me with all the political gatherings that will be happening it would be a good idea to keep reminding voters that the Red McCombs’ threat to Alberta Park and the Rio Grande River remains alive and well.
In fact, it feels like the matter has evolved from a calculated speculative developer's dream, into an old billionaire's obstinate vendetta against Colorado's citizens.
Yes, it is true that the matter is back in the courts, which means another holding pattern as we wait the new decisions, still it also requires our redoubled attentiveness and continued outspoken public opposition to catch and thwart LMJV’s next sneaky move.
I know that the San Juan Citizens Alliance has posted everything they finally received through their long overdue FOIA request and they encourage citizens to look through those papers since they tell a revealing and pretty damning story.
Friends of Wolf Creek has this crisp summary along with much more information awaiting your review:
The Latest News
On July 20, 2018 we filed a Freedom of Information Act request to better understand the Forest Service’s decision to grant an easement to allow for construction of the Village at Wolf Creek. After months of not providing documents, we filed suit to obtain the information, and a Federal Judge has ordered the Forest Service to release documents to us every two weeks. We are posting the documents here as we receive them so that the public can remain involved in this process of understanding how the Service is making decisions about the management of our public lands.
Please continue to follow this activity on our website or sign up for our action alerts to be notified when actions are available. #No Pillage

I was also very impressed with the SJCA website, it’s been improved with more information, great images and a wonderful LMJV/VWC timeline for quick orientation.  I will be featuring excerpts in my next post, although I can't resist including their timeline now:

Posted by citizenschallenge at 11:56 AM No comments: