Here's an addition to my previous posts looking at the negotiation waiver that Tri-State wants LPEA (and all their other electrical coops) to sign. This is a Repost of a Durango Telegraph article written by Tracy Chamberlin this past June and it provides some good background information.

At the July Board of Directors meeting it was decided not to reject the Tri-State waiver, instead they will continue tabling Resolution 2017-07 until the dispute between Delta Montrose Electric Association and Tri-State G&T settles down.  It appears Tri-State has filed an appeal to the Federal Energy Regulatory Commission decision discussed in this article - meaning it's still a very dynamic situation.

Seems to me so much more reason for stakeholders to take an active interest and help LPEA define their approach to an energy future that promises many challenges.  I thank Missy Votel for permission to reprint this article in its entirety.

In wake of recent ruling, LPEA to advise against controversial waiver 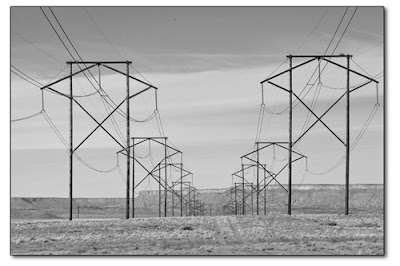 Under its contract with Tri-State, LPEA has to buy 95 percent of its power from the wholesaler. The other 5 percent can be purchased from outside sources, like small renewable projects. At just over 4.5 percent already, the local co-op has little wiggle room. / Durango Telegraph file photo

Even though they were waiting for it, they never saw it coming. One day after La Plata Electric Association’s Board of Directors took the wait-and-see approach on a controversial waiver issue, the Federal Energy Regulatory Commission announced a decision that completely changed the game.

It all began last year when Delta-Montrose Energy Association, a regional electric co-op like LPEA, was approached by a small hydroelectric power producer.

Read more »
Posted by citizenschallenge at 12:07 PM No comments:

The GOP hasn't exactly been subtle about their desire to return to their idealized version of America in the 1950's, but this mailer that just landed in Durango really takes things to a new level: 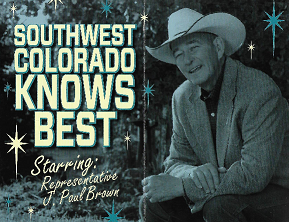 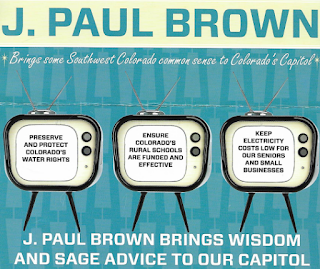 This was actually sent out in support of Rep. J. Paul Brown, an extremist legislator who would fit in better in a Mad Men world than in modern Colorado.

Brown deserves every bit of 50's nostalgia that accompanies that mail piece. He has consistently voted to gut environmental protections, prevent a woman's right to choose, and to put corporations ahead of Colorado families.

Read more »
Posted by citizenschallenge at 5:13 PM No comments:

The short version, the wheels of justice grind ever so slowly, but on they grind.  I'll let Chris Talbot-Heindl fill you in on the details:

Federal Judge Matsch: “Get the guts of the case before me.”

Last Friday, during a motions hearing on the Wolf Creek case, Friends of Wolf Creek asked Federal Judge Richard Matsch to compel the Forest Service to obtain and disclose records and billing statements from the contractors who prepared the environmental analysis. Friends of Wolf Creek also requested the confidential settlement agreement between the Leavell-McCombs Joint Venture and the Wolf Creek Ski Area, which involved the challenged land exchange.

One of our lawyers for the case, Travis Stills, explained that the documents “we’ve received piece meal over the last two years paint an incomplete picture and our hope is that the requested documents would fill in the gaps.”

“We believe the contractor records contain a missing piece to this puzzle and are hopeful we will have the opportunity to review that information through our ongoing FOIA litigation” stated Matt Sandler, Staff Attorney for Rocky Mountain Wild, “that said, we already have strong evidence to support our case and look forward to presenting that to the Court.”

Judge Matsch was particularly interested in the content of the confidential settlement agreement. The lawyer representing the Ski Area stated that the information contained in the settlement agreement is sensitive but did not provide insight into the relevancy to the litigation. Judge Matsch ordered the Department of Justice attorney for the Forest Service to review the document and determine the relevance of the information and report back to the Court.

Regarding the timeline of the merits case, Judge Matsch ordered that all parties should work together to complete the Administrative Record and determine a timeline for addressing the merits of the case. He ordered that the case start with the record as it stands now, supplemented with relevant parts of the secret settlement agreement and other documents that have already been identified. “Get the guts of the case before me,” he said.

The merits case asserts numerous violations of federal environmental laws, including the claims that the Forest Service unnecessarily limited the scope of its environmental analysis on a land exchange with the Leavell-McCombs Joint Venture to avoid fully analyzing the impacts that the proposed development of a 8,000 person “village” would have on the Rio Grande National Forest and sensitive wildlife, including the Canada lynx.


In March 2016, we filed a motion in the U.S. District Court to have records in the possession of the contractors that the Forest Service hired to prepare the environmental analysis of the land exchange disclosed and potentially added to the Administrative Record. While these records legally belong to the Forest Service, they have refused to ask the contractors to supply all of them. The attorneys for the Forest Service and the Leavell-McCombs Joint Venture responded to the court arguing that the Administrative Record was complete without these additional records. In the first week of May, we filed a 23-page Reply brief, and now we are awaiting the Court's decision. Full copies of our Brief, the defendant's Responses, and our Reply brief can be found here:

Posted by citizenschallenge at 10:40 AM No comments:

Encouraging co-ops to look to renewables


It started with an email that read: “La Plate Electric Association’s board of directors is meeting on June 15 to consider a blanket waiver giving Tri-State Generation and Transmission, our power provider, the right to be the primary negotiator of ALL our renewable energy projects going forward. Given Tri-State’s reliance on coal, given how it is stonewalling affordable solar and other renewables …”

The email’s plea was simple, if you care about developing renewable energy, get informed, write the LPEA's BoD, and attend the upcoming June Board of Directors meeting at 9AM for your short opportunity to speak and share concerns.

My curiosity roused, I started ‘googling’ and reading related articles that pieced together an interesting regional story worth sharing. To understand what happened at LPEA this past month, you need to go back to the 1978 passage of PURPA (Public Utilities Regulatory Policy Act) which mandated electrical co-ops such as LPEA start purchasing some of their power from renewable energy sources.

Read more »
Posted by citizenschallenge at 10:18 AM No comments: