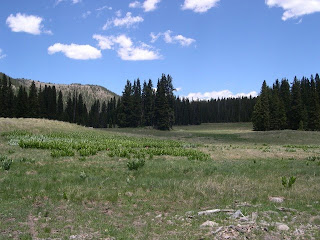 {Thank you www.lutheransource.net/WolfCreek.htm for the image of Alberta Park}

From the Durango Herald

"The June 7 proposal to the Forest Service formally starts an environmental review that could take 18 months or more. Officials at Rio Grande National Forest said Thursday they are doing an initial review of the plan to decide whether it is complete enough to even accept. If they do accept it, that will trigger a long process that includes public involvement..."

"Developers of the Village at Wolf Creek have modified plans for a proposed land swap near the top of Wolf Creek Pass, where a resort town with ski-in and ski-out access is envisioned.

"The amended plan is similar to one submitted earlier this year by developers, but it makes slight boundary adjustments to accommodate the realignment of a ski lift that would link the village and Wolf Creek Ski Area. It also includes two alternate plans should the U.S. Forest Service reject the land swap..."

Letter to the Durango Herald

Dear Editor,
Clint Jones, Village at Wolf Creek project leader from Austin, Texas (elevation 500’), says his reminted land exchange offer “is in the best interest of all parties, including the public.” How does he justify this conclusion when he won’t even acknowledge, let alone discuss, the many problems with the VWC concept both environmental and financial; problems that tweaking boundaries won’t fix?

Read more »
Posted by citizenschallenge at 1:47 PM No comments: